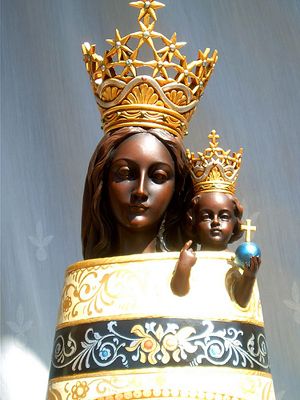 Happy Feast of the Annunciation!!!
I first wrote this on the feast of Our Lady of Loreto, which commemorates the date when the Holy House first landed in Italy on December 10th, 1294.
Yes, you read that right.
The house LANDED in Italy.
Yes, it flew through the air and then, yes, it landed in Italy – in a town called Loreto. It is quite a story, but there is lots of historical evidence that points to it being true.
I’ve given several retreats on it, because it is one of my favorite pilgrimage sites I’ve ever visited.
It is truly amazing.
I’ve researched it so thoroughly that I have far too much information to share in this short article.
But, if you believe God can work miracles, you can believe this is to be true.
For a far greater miracle than a simple house flying through the sky happened inside it.
It is a story we’ve heard so often that we fail to realize how incredible and amazing it is.
The God, who created the whole universe, who created you and me and everything seen and unseen…
The God, who holds us in being… became flesh inside a young teenage girl, whom He created, when she said yes.
This house has such an amazing story, because of what took place inside it’s wall.
God became man.
It is the Home of the Annunciation!!!
Imagine!
Think of how St. John Paul II traveled the globe and realize when he entered into this little house, he said:
“Here is the holiest place on earth!”
Imagine! 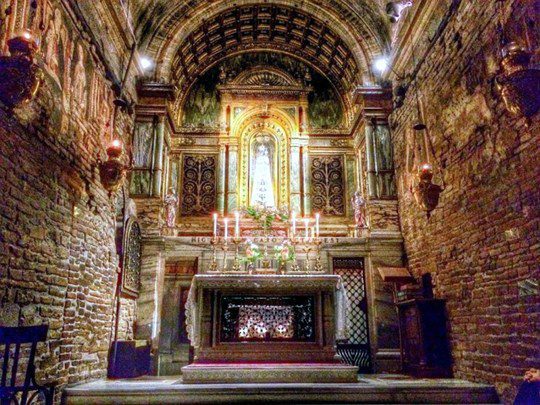 Imagine!Here the “Word became Flesh”!!!
Imagine!
… standing, kneeling, praying in the same spot where the Angel Gabriel came to ask Mary if she would be the mother of God.
Imagine!
… being in the place where the Holy Spirit came upon Mary and overshadowed her — and the Second Person of the Holy Trinity, God from all eternity, deigned to be conceived in the womb of this precious, innocent, faithful, warrior of a girl —
And BECAME MAN!
I was privileged to make a pilgrimage to the Holy House of Loreto — a site that can claim to be the home of the Annunciation, Mary’s birthplace and the home of the Holy Family in Nazareth – the home they lived in from the time they returned from Egypt!
Imagine!
… being in the home where the Holy Family ate, where they worked, where they slept, where they played and laughed…
… being in the place where Jesus grew up and became a man and the place where St. Joseph died….
… being in a place of countless miracles — including Popes and saints being cured.
The Holy House draws millions who seek God and the Holy Family and Our Lady’s intercession.
Even it’s presence on the coastland town of Loreto in Italy is a miracle.
Evidence supports the tradition that the home was carried by angels from Nazareth at the time of one of the fiercest radical muslim invasions.
The invaders were determined to kill Christians and destroy all the Christian holy places they came across.
Mary appeared first to a priest and then to a monk explaining this, as she said her home had become a Church from the earliest days of Christianity – specifying that St. Peter would often offer the Mass there.
She said her home had been saved again and again by the crusaders, but at one point it would have been destroyed without the supernatural help of the angels.
The home has only 3 sides – as the fourth side was a grotto – a cave in the hillside.
This is why the Church of the Annunciation in Nazareth is also honored as the place of the Annunciation — as the Basilica stands over the cave that could not be destroyed.
This is one of my favorite places on earth!
It was an amazing place to be, to pray at — it moved me so deeply that I have built whole retreats around it.
May just hearing about it’s holiness be a great source of grace and prayer for you as we ask
Our Lady of Loreto, pray for us!
O, Holy Family, pray for us and for all our families!
O, Holy Angels protect us!
To find out more:
Part I Video of the Holy House by Bob and Penny Lord
Part II Video of the Holy House by Bob and Penny Lord
© Janet Moore. 2020. All Rights Reserved.