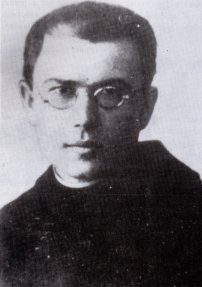 As we read yesterday, as the young Maximilian saw the Freemasons celebrating their 200th Anniversary by parading throughout Rome, he understood “the destructive effects of atheistic secularism” that it represented. He saw, already in 1917, “the spreading of dangerous religious indifferentism and various antireligious theories, as well as of the subtle decline of morality. He suffer[ed] in witnessing a certain quietism [a failure to act – passivity] among Catholics, despite the persecution [of] the Church … and the popes’ unrelenting appeals to live out the missionary dimension of the Christian calling.”
In response, because he “knows that Jesus is the Lord of history, the Prince of peace. He understands that the Immaculate Virgin is the new Woman, called by Jesus Himself to be the model, guide and Mother of grace for all men of every time and place…”
http://missionimmaculata.com/images/Documents/preparation_for_consecration/1.The_Beginning_of_a_Great_Adventure.pdf

So it is precising in and through Jesus and becoming like him in every way – even to beholding Mary as our mother, that evil will be defeated within us and in the world.
Thus, the Militia Immaculata, the vast army of souls of souls completely conformed to Christ – is envisioned and formed.
Yet, again, just as with Christ, victory only comes through the Cross…
and so it was with Maximilian and the Militia Immaculata.
Just as he was beginning his priestly life, he developed tuberculosis and was hospitalized for months. This is how he wrote of this time:


When everything seems to fail…

“For more than a year … the MI made no progress. In fact, all kinds of setbacks piled up, to the point that members were uncomfortable even mentioning it among themselves. One of them even tried to convince the others that the MI was something useless.“It was then that, with wonderful signs of election, the Immaculata summoned to her side Fr. Antoni Głowiński, and ten days later, Br. Antonio Mansi, both victims of the Spanish flu. As for me, the condition of my lungs got worse: every time I coughed, I spat blood. That is when it all started to change. Having been excused from school, I took the opportunity to copy out the ‘Program of MI’ and gave it to the Most Rev. Fr. General, in order to obtain his blessing in writing. ‘If there were at least 12 of you…,’ said the Most Rev. Fr. General. He wrote his blessing and voiced his desire (I believe on that very occasion) that the MI should be propagated among our youth. Membership started to increase, and has increased more and more ever since.” (KW1278)
St. Maximilian himself continued to recall the first steps of the Movement that later would spread rapidly throughout Poland and in other nations. But now he speaks of the time of gestation, the time during which the grain of wheat has to die in order to become a full kernel and eventually bread (cf. Jn 12:12-26). Maximilian helps us to recognize the Gospel logic at work. For more than one year the MI had not seen any progress, while difficulties and setbacks attempted to extinguish enthusiasm. Everything seemed to fail. The death of two of the young co-founders and the worsening of Maximilian’s TB, however, marked the beginning of change.
The MI began to flourish precisely thanks to this paschal journey of suffering and death, which gave rise to an increasingly numerous response from people who chose to embrace its ideal of total dedication to Our Lady as instruments of love in her immaculate hands…
“Nothing great comes without pain in God’s works. And could there ever be too great a sacrifice, when it comes to the Immaculata? We are consecrated to her not only in theory, but actually, and in practice. And until we grow tired in our fight to conquer the world for the Immaculata, suffering will not cease to come upon us. And the more strenuously we struggle, the heavier and more numerous will be the suffering that befalls us. But only until our death. Then there will be the resurrection. And even if (but that is impossible) the Immaculata were to give us no reward for this, yet we would still consecrate ourselves to her with fervor and enthusiasm throughout our entire lives. For we do not consecrate ourselves in view of a reward, but solely for her.”(KW 631).”
http://missionimmaculata.com/images/Documents/preparation_for_consecration/3._When_Everything_Seems_to_Fail.pdf 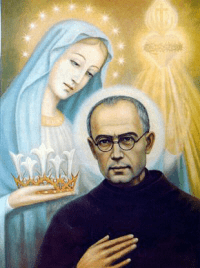 It
is with this supernatural perspective and in the power of the Holy
Spirit, that we pray and ponder Mary’s role within the plan of the Most Holy Trinity in order to understand more fully how our consecration to her is ordered to lead us into ever deeper union with God as Trinity – Father, Son and Holy Spirit:

“Maximilian Kolbe was an apostle of the veneration of the Blessed Virgin, seen in her first, original privileged splendor, as she defined herself at Lourdes: the Immaculate Conception. It is impossible to separate the name, the activity and the mission of Blessed Kolbe from that of Mary Immaculate. It was he who instituted the Militia of the Immaculata here in Rome, even before he was ordained a priest, on October 16, 1917.
“It is well known how the humble and meek Franciscan with incredible audacity and extraordinary organizational genius developed the initiative and spread devotion to the Mother of Christ, contemplated as ‘clothed with the sun’ (cf. Rev. 12:1). This devotion was the focal point of his spirituality, his apostolate and his theology.
“Let no hesitation restrain our admiration and commitment to all that our new Blessed had left us as a heritage and an example, as if we too were distrustful of such and exaltation of Mary in view of two other theological movements, the Christological and ecclesiological, which seem to compete today with the Mariological. On the contrary, there is no competition, for in Father Kolbe’s Mariology, Christ holds not only the first place but the only necessary and sufficient place in the economy of salvation. His love of the Church and its salvific mission was never forgotten either in his doctrinal outlook or in his apostolic aim. On the contrary, it is precisely from our Lady’s complementary, subordinate role in regard to Christ’s universal, saving design for man that she derives all of her prerogatives and greatness.
“How well we know it! And Kolbe, in accord with the whole of Catholic doctrine, the whole liturgy and the entire theology of the interior life, sees Mary included in God’s plan of salvation as the ‘term fixed by eternal counsel,’ as the woman filled with grace, as the Seat of Wisdom, as the woman destined from eternity to be the Mother of Christ, as the Queen of the Messianic Kingdom, and at the same time as the Handmaid of the Lord, chosen to participate in the Redemptive Act as Mother of the God Man, our Savior. ‘Mary is the one through whose intercession men reach Jesus and the one through whom Jesus reaches men’ (L. Bouver:Le trone de la Sagesse, p. 69).
“Therefore our Blessed is not to be reproved, nor the Church with him, because of their enthusiasm for the formal religious veneration of the Mother of God. This veneration with its rites and practices will never fully achieve the level it merits, nor the benefits it can bring precisely because of the mystery that unites her to Christ, and which finds fascinating documentation in the New Testament. The result will never be a ‘Mariolatry,’ just as the sun will never be darkened by the moon; nor will the mission of salvation specifically entrusted to the ministry of the Church ever be distorted if the latter honors in Mary an exceptional Daughter and a Spiritual Mother. The characteristic aspect, if you like, and the original quality of Blessed Kolbe’s devotion, of his ‘hyperdulia’ to Mary, is the importance he attributes to it with regard to the present needs of the Church, the efficacy of her prophecy about the glory of the Lord and the vindication of the humble, the power of her intercession, the splendor of her exemplariness, the presence of her maternal charity. The Council confirmed us in these certainties, and now from heaven Father Kolbe is teaching us and helping us to meditate upon them and live them. This Marian profile of our new Blessed places him among the great saints and seers who have understood, venerated and sung the mystery of Mary.” (Homily by St. Paul VI on the Beatification of Maximilian Kolbe)”

Come Holy Spirit, living in Mary, help us to prepare well for the Total Consecration.
St. Maximilian, pray for us and help us live out the wisdom you express. Especially when we are going through great suffering, help us remember that “Nothing great comes without pain in God’s works” as your life so profoundly attests.  Be with us and help us understand Mary’s place in the Holy Trinity’s plan of salvation and give ourselves entirely and without reserve to Our Blessed Mother, so that she, in turn, can draw us ever closer to Jesus and make of us great saints!  We ask this in Jesus’s Name, Amen.
© Janet Moore 2019. All Rights Reserved.