What is the Holy Father's Mission In Medjugorje? 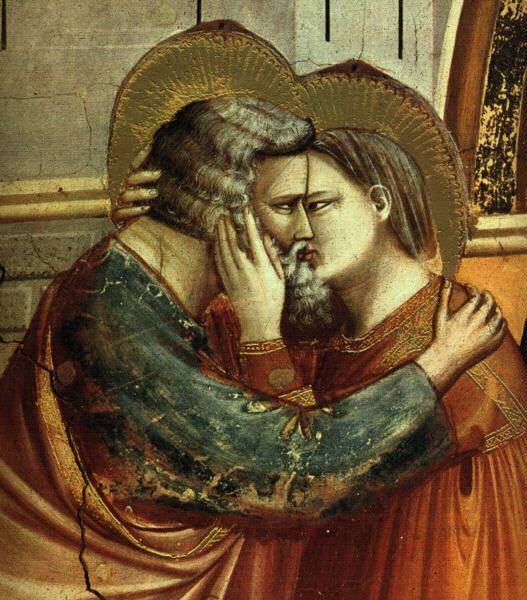 I felt so compelled to write the article on St. James and Medjugorje, that even after first posting it, I couldn’t stop working on it through the night, and although I didn’t realize it at the time I began…


The Feast of St. James is a day of tremendous celebration in Medjugorje. Not only is it the parish’s feast day, St. James’ is the patron saint of pilgrims. How amazing these connections and hoe much there is to ponder within the providence of God.
So, I believe St. James inspired me to dig deeper, for there is so much more to the story.
So, this is, in a sense, an addendum to the article about St. James and Our Lady. But, it is also so much more.


[VIDEO] Today in Medjugorje for the Feast of St James


For, even after being up all night writing the article, again I hadn’t realized that today, July 26th, is the Feast of St. Joachim and Anne. So, not only St. James, but how much Mary’s parents, (and Jesus’ grandparents), must have also been inspiring me to research and share more details regarding these great and unprecedented events that are happening in Medjugorje at this time.


How deeply Mary’s mom and dad must love this place where it is reported that she has been coming daily for over 37 years! If this is really true, how much they must be praying for all those who come to this place seeking Christ, and for “those who do not yet know the love of God,” for whom Mary’s continues to beg us to pray.


If all that is reported in Medjugorje is real, it is incredible to contemplate how close the Mystical Body of Christ is to us!  All the signs, wonders and graces flowing upon the world through Medjugorje, I’m sure are, in part, sent to help us to recognize how thin the veil is between heaven and earth! And how deeply ALL the angels and saints are invested in our lives and are praying for God’s plans for our conversion to be fulfilled!!

No other reported apparition site has had the Pope’s personal representative (Papal Envoy), sent to live and study the site of apparitions firsthand –while they are still reportedly ongoing and being investigated. And, then, in the following year, the same Papal Envoy, Archbishop Henryk Hoser, is sent again to the apparition site, no longer to study it, but to stay indefinitely as the Apostolic Visitor, again as personal representative of the Vatican and the Pope.


With St. James, St. Joachim and St. Anne, then, leading me on, I will try to provide a comprehensive overview of these amazing events that are taking place concerning Medjugorje and Archbishop Hoser. In order to try to do justice to this vast topic, I will rely heavily on the Archbishop’s own words.


This first article will focus on the beginning of Archbishop Hoser’s mission as Apostolic Visitor.  The second article will go back to the Archbishop’s words following his first visit last year as Papal Envoy, sent by Pope Francis to study the spiritual aspects of Medjugorje.

“the Holy Father, as the Universal Shepherd of the Church … sends shepherds to the places were people live, where the faithful gather, seeking for the light of salvation.”

He spoke of pilgrims coming to Medjugorje from over 80 countries of the world, (about 1 million annually), many of whom, with “a firm and decisive motivation…” travel great distances and with much effort to this remote area.


Distances that are not only understood as miles, but often reflect:

“the existential situation of so many who are far from God, from Christ, from their Church and from the light that gives purpose to life, or gives a dignified goal, a life worth living.

Now we can understand why they Holy Father has sent the Apostolic Visitor to Medjugorje. The pastoral care requires to ensure a stable and continuous accompaniment of the Parish Community of Medjugorje and of the Faithful who come here on pilgrimage.

In another meaning, near are all those who live an ardent and warm faith, and who desire to live in an intimate and grateful contact with the Risen and Merciful Lord.”

“Let us now ask the fundamental question: Why do so many people come to Medjugorje every year?

The clear answer is this: they come to meet someone, to meet God, to meet Christ, to meet His Mother. And then to discover the path that leads to the joy of living in the house of the Father and of the Mother; and ultimately to discover the Marian way as the more certain and sure one. This is the path of the Marian devotion that has been taking place here for years.”

“This is what the people’s devotion in Medjugorje looks like: in the center is the Holy Mass, Adoration of the Most Blessed Sacrament, the sacrament of Reconciliation. And all of this followed by other forms of devotion: the Rosary and the Way of the Cross, which have turned what in the beginning used to be sharp stones into smooth paths.”

“Pope John Paul II said [in his apostolic letter on pilgrimages to sacred places], ‘Just as time can be marked by special moments of grace, space, too, may by analogy, bear the particular saving actions of God. … also sacred spaces, where the encounter with the Divine may be also experienced more intensely than it would be normally in the vastness of the cosmos.’

Medjugorje gives us both, the time and the space of God’s grace, through the intercession of the Blessed Virgin Mary, the Mother of God and the Mother of the Church, whom here we honor as the Queen of Peace …”

He concluded by saying:

“It is true, the world is in great need of peace, peace in one’s own heart, peace in the family, peace in society and international peace. Peace is desired by everybody, especially by the people of this country who suffered so much in the recent Balkan War.

To promote peace means to build a civilization based on love, on communion, on fraternity, on justice, and therefore on peace and freedom. May the Gospa, the Mother of the Prince of Peace who was proclaimed by the prophets, be our Protectress, our Queen and our Mother. Amen”


Mass was offered for thousands of faithful and was concelebrated with Bishop Galiese of Italy and 118 other priests! 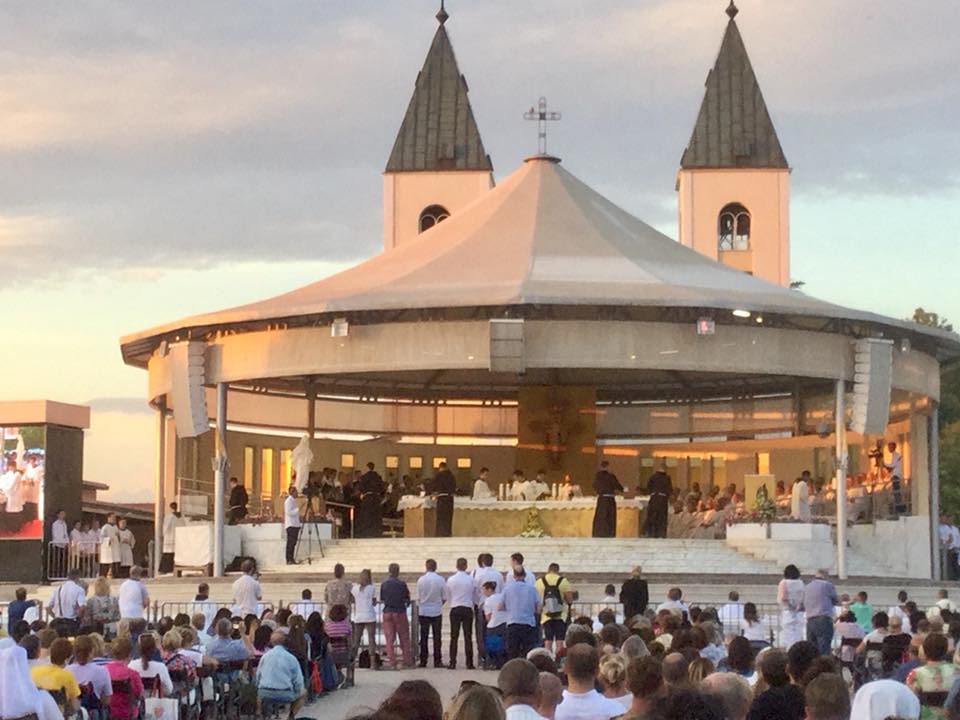 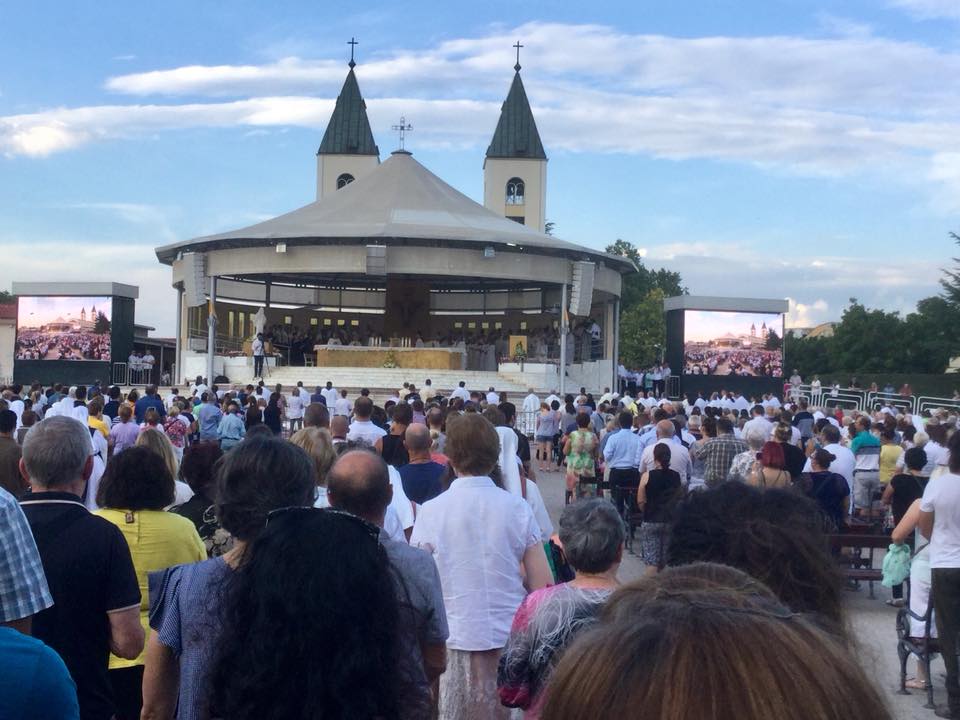 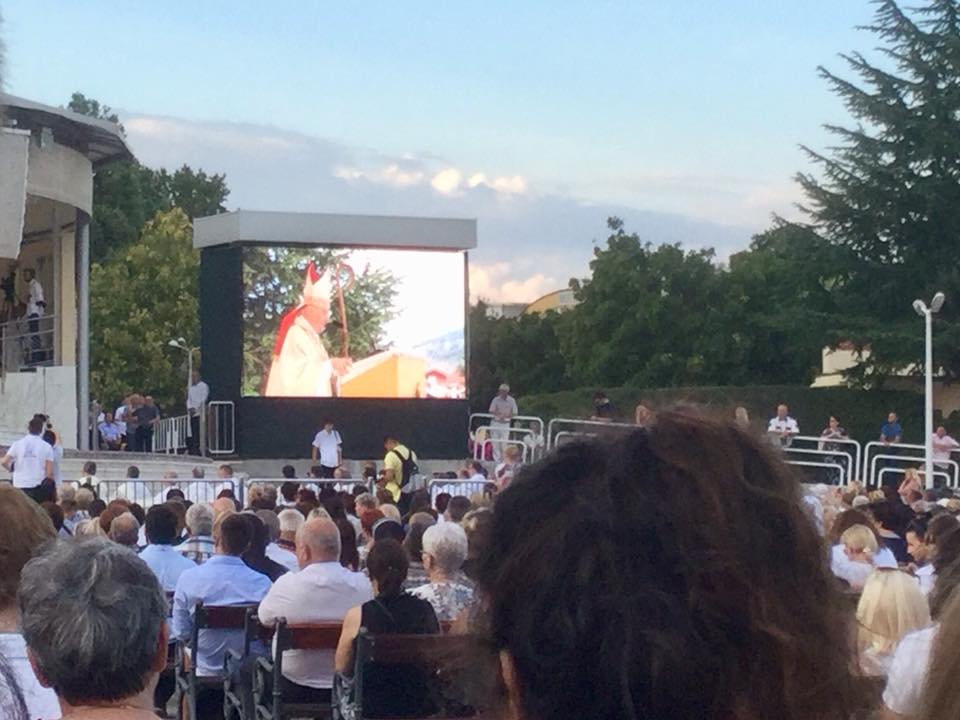 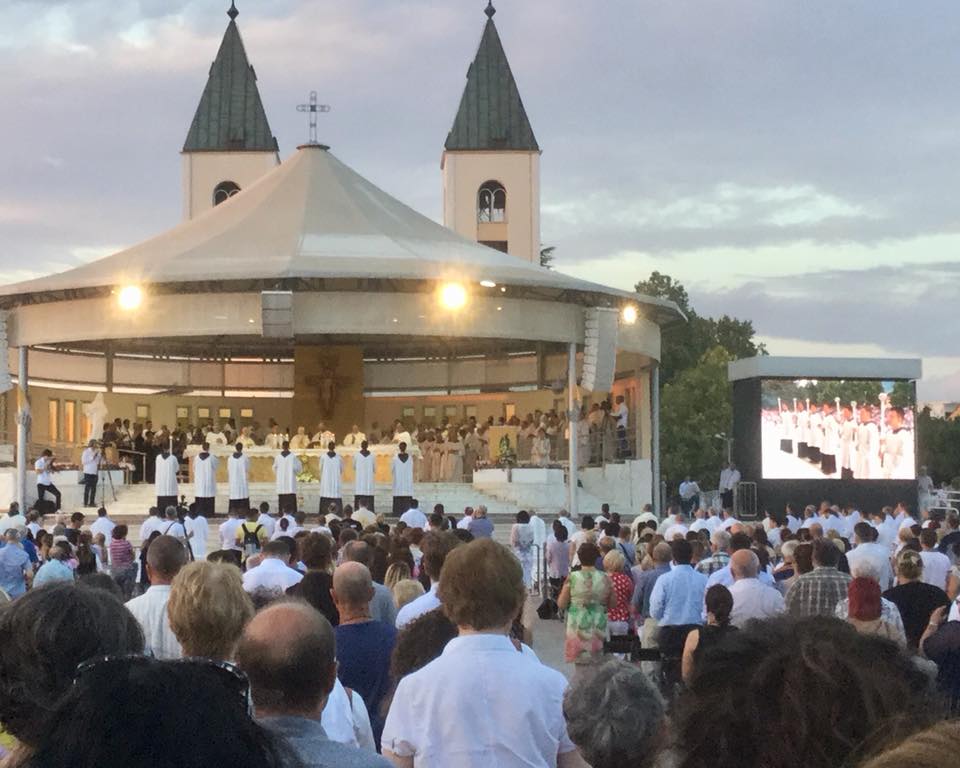 Miki Musa, Medjugorje guide and translator, summarized the thoughts of people  in Medjugorje, by saying:

“It was unbelievable. It almost felt like a dream to see a person who came in the name of the Holy Father standing at the altar in Medjugorje.

In my opinion, this is the greatest event to take place in Medjugorje in the past 37 years, after June 24, 1981 when the apparitions first began. We are all so grateful. I had to stop my translation for a moment and take a deep breath. He said such powerful words.”

No wonder the Holy Spirit wouldn’t let me sleep!
What tremendous grace for Medjugorje and for the tens of millions who have traveled there!


Click here for Part II of this series on Archbishop Hoser’s mission in Medjugorje.

© Janet Moore 2018. All Rights Reserved.
Pictures of the Holy Mass on July 22, 2018 were taken by Chic and Marie Paolini and used with permission. 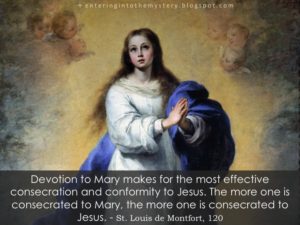 Day 23 Readings and Prayers for St. Louis de Montfort's 33 Day of Consecration to Jesus through Mary – An Online Guide 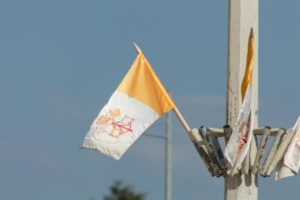 Do the Papal Envoy's Words Mean Vatican Approval for Medjugorje is Near?

(c)Mateo Ivankovic  The Papal Flag which flies outside St. James Church!!!! July 30, 2018 This Part II of the Series on the Extraordinary Events of the Vatican and Medjugorje — which actually goes back to Pope Francis’ first appointment of Archbishop Henryk Hoser to the site of reported daily apparitions of Our Lady for nearly 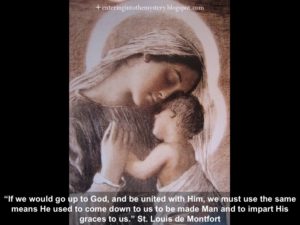 Day 21: God Alone – With, In and through Mary – 33 Days to Total Consecration

“I am all yours, and all that I have is yours, O most loving Jesus, through Mary, your most holy Mother”(True Devotion, 233). DAY 21 of 33:  SECTION 3:  Entering into the Mystery of Jesus Being Crowned with Thorns   Contemplating the Sorrowful Mysteries with Mary St. Mother Teresa and St. Louis de Montfort as 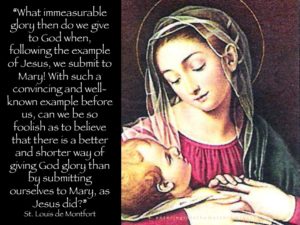 Day 17 Readings and Prayers for St. Louis de Montfort's 33 Day of Consecration to Jesus through Mary – An Online Guide

PrevPreviousDo the Papal Envoy's Words Mean Vatican Approval for Medjugorje is Near?
NextPope's Representative Officiating at Medjugorje's Annual Youth Festival – "Installment of Apostolic Visitor Sign of a Great Respect and Recognition … The Act Through Which the Church Officially Recognized the Good Fruits of Medjugorje"Next
Scroll to Top